Tom Evans, With SOE in Greece: The wartime experiences of Captain Pat Evans 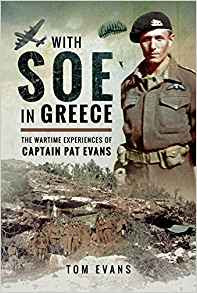 Pat Evans parachuted into German-occupied Northern Greece in September 1943. His mission as a SOE operative w as to support the Greek resistance movement, carry out sabotage and commando operations and gather military intelligence.
By this time Greece was not only ravaged by a brutal occupation but w as also being torn apart by feuding political factions on the edge of civil w ar. Evans had to walk a tight-rope between the Germans, the Communist-directed ELAS, Macedonian irredentists and his own SOE m asters in Cairo and Allied High Command.
After the Nazis withdrew in late 1944, he was sent to Northern Greece to try and restore some form of normality amid the chaos of civil w ar. His success can be measured by the w arm thin which the locals still remember him , over 70 years on.
This book draws on a wide range of sources, including SOE and War Cabinet papers, but it is Pat Evans’ unpublished letters and reports that give the reader an insight into the challenges that he faced, both operationally and politically.
The result is a thrilling and informative read.
==
Contents
[…]
Chapter 1 The Journey Out
Chapter 2 Boodle
Chapter 3 Fertiliser: The Station on Vitsi
Chapter 4 Special Operations
Chapter 5 NOAH’S ARK
Chapter 6 Separatism and Civil War: The Macedonian Question
Chapter 7 Cairo: Intermission
Chapter 8 New Beginnings? Fiorina and the AGIS 119
Chapter 9 Going Home 137
[…]
==
Foreword and Acknowledgements
[…]
It would have been impossible to understand Pat’s activities or the nature of the difficulties faced by the mission without following in his footsteps in Western Macedonia. My interviews and discussions with men who knew Pat in Greece provided additional first-hand evidence. I owe a particular debt of gratitude to my companions on three field trips: Howard Rees, Panagiotis Kousoulinis and Athanasios ‘Thanassis’ Kallianiotis. Without their help, knowledge of the country, its people and their history, I would have got nowhere. Howard was my first guideand mentor. Thanassis not only accompanied my third field trip but also welcomed me in his family home in the village of Aiani, where he and his mother maintained the great Greek tradition of hospitality. Thanassis has been indefatigable in finding answers to seemingly impossible questions and showed me how a real expert goes about gathering oral history. I am also particularly grateful to Professor John Koliopoulos, who introduced me to Panagiotis and Thanassis and made me feel welcome among the historians; his book, Plundered Loyalties, was an essential companion and guide of a different kind.
[…]
==
[από τη σελίδα 131 του βιβλίου]
[….]
During the war ELAS and KKE had assumed - and KKE continued to believe post-war - that Pat, as a British officer, was a man of the Right. They were mistaken: like many intellectuals of his generation, Pat himself had joined the Communist Party in the 1930s, as an Oxford undergraduate, and had read Marx and Engels. His membership did not last long and his experience in Greece removed any lingering desire to join the Labour Party. By 1945 he defined himself as a Radical - emphatically not a Tory but ‘a leftish Liberal’ - although he had no idea what being a Radical meant in terms of British party politics. At heart, Pat was intensely curious, open-minded and suspicious of dogma. Refusing to take conventional ideas on trust, he was interested in people as individuals, irrespective of their class, status or occupation. […]