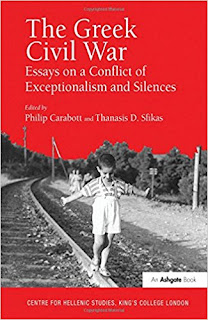 Half a century after the civil war which tore apart Greek society in the 1940s, the essays in this volume look back to examine the crisis. They combine the approaches of political and international history with the latest research into the social, economic, religious, cultural, ideological and literary aspects of the struggle. Underpinned by the use of a wide range of hitherto neglected sources, the contributions shed new light, broaden the scope of inquiry, and offer fresh analysis. Thus far, comparative approaches have not been employed in the study of the Greek Civil War. The papers here redress this imbalance and establish the not always so clear links between Greek and European historical developments in the 1940s, placing the evolution of Greek society and politics in a European context. They also highlight the complexity and interconnections of the social, economic and political cleavages that split Greek society, and provide a comprehensive and subtle understanding of the origins, course and impact of the Greek Civil War in a variety of contexts and levels. The volume will appeal to those interested in the European history of the 1940s and the origins of the Cold War, in addition to the specialists of modern Greek history and those engaged in the comparative study of civil wars.

Part I
2. The Greek Civil War: Greek exceptionalism or mirror of a European civil war?, Martin Conway.
3.  What was the problem in Greece?: a comparative and contextual view of the national problems in the Spanish, Yugoslav, and Greek civil wars of 1936-49, Philip B. Minehan.
4. The Cominform and the Greek Civil War, 1947-49, Ioanna Papathanasiou.
5. A prime minister for all time: Themistoklis Sofoulis from Premiership to Opposition to Premiership, 1945-49, Thanasis D. Sfikas.
Part II
6. Struggling from abroad: Greek Communist activities in France during the Greek Civil War, Nicolas Manitakis.
7. Getting Greece "working again": the London Agreement of January 1946, Athanasios Lykogiannis.
8. Becoming Communist: political prisoners as a subject during the Greek Civil War, Polymeris Voglis.

Part V
15. The road to reconciliation? The Greek Civil War and the politics of memory in the 1980s, David Close.