John Iatrides - Linda Wrigley (ed.), Greece at the crossroads. The Civil War and its legacy 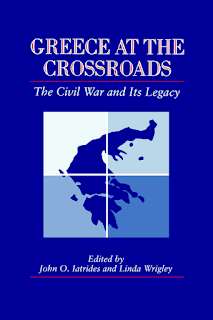 The end of the cold war and the cooling of ideological passions make possible a more detached and balanced examination of the major epi­sodes of the East-West conflict. At the same time, the increased availabil­ity of source materials, both government and private, reveals a more complex reality than earlier interpretations described, particularly with respect to the role of the two superpowers, which in certain of these episodes was less decisive than previously thought.
One such episode is the Greek civil war, a critical turning point in the history of that nation and, according to some historians, in the shaping of America’s containment policy. The study of the Greek civil war is im­portant, therefore, to our understanding not only of the contemporane­ous and subsequent developments in that country but also of the dynamics of Balkan forces and the intricacies of American and Soviet perceptions and tactics in the early days of the East-West confrontation.
For Greece, the end of the Second World War brought to the surface new and dynamic social forces and unveiled a national schism of unprec­edented ferocity. The deeper roots of this state of affairs can be traced to the bankruptcy of the interwar political institutions that had spawned the dictatorship of Ioannis Metaxas in August 1936. When the dictator suddenly died in January 1941, and the country in short order suffered complete military defeat at the hands of the German invaders and occu­pation by the Axis forces a few months later, the regime’s collapse not only created a power void but set in motion the struggle for a new, post­war political order and legitimacy whose outcome was bound to determine the country’s longer-term future. The simmering crisis was greatly aggravated by the paralysis imposed upon the Greek polity by the harsh enemy occupation, many instances of collaborationism, and by the highly politicized resistance movements that mobilized, indoctrinated, and armed large numbers of followers propounding radical views.
In the fall of 1944, at the moment of liberation from the German occupiers, Greece stood “at the crossroads” and in need of a new constitu­tional and social order. At least in principle, the political paths open before the populace ranged across the entire ideological compass: from a dictatorship of the Left or the Right to a moderate socialist, progressive democratic, or rigidly conservative regime; from a republican to a mon­archist form of government. The final choice could have been made on the basis of a passionate but peaceful electoral contest to determine the nation’s will. But the factions that vied for influence over the state pro­moted their particular agendas with a vehemence, exclusiveness, and mistrust that destroyed any chance for genuine compromise and recon­ciliation. Before long the political tug of war turned into full-scale civil war.
Moreover, the contest for legitimacy and control over the nation’s fu­ture could not be waged on a purely Greek stage. As in other periods of its development, Greece was buffeted by powerful external forces that sought to harness the feuding factions, as well as the Greek state itself, to their own particular interests. In turn, in their desperate effort to de­feat their domestic foes, Greek leaders eagerly solicited foreign assis­tance, guidance, and patronage. In the end, the indigenous struggle for power became enmeshed not only in age-old Balkan feuds—which have re-ignited with renewed ferocity today—but also came to be viewed as a major battleground of the cold war, pitting the British and the Americans against the Soviet-dominated Communist-bloc countries to the north of Greece. External factors thus exerted considerable influence over the course and final outcome of the Greek civil war and had much to do with the political path Greece was to follow beyond the decade of the 1940s.
The chapters in this volume represent a systematic attempt to examine the domestic and external forces that were actively involved in the Greek crisis of the late 1940s. Specifically, they consider the political options available to postwar Greece by identifying the principal actors promot­ing such options and analyzing their programs and tactics, their strengths and weaknesses. These chapters also highlight the close interaction between domestic, regional, and global levels of conflict as they relate to the political development of Greece. It should be noted that because the involvement of Britain and the United States in Greek affairs during the 1940s has been the subject of a large number of previous studies, mostly in English, a detailed analysis of the development of British and Ameri­can policy toward Greece is not attempted here.
The chapters in this book originated as papers presented at n confer­ ence held at the Vilvorde Conference Center in Copenhagen, Denmark, June 3-5, 1987, and most were subsequently extensively revised. The conference was organized under the aegis of the Lehrman Institute in New York City. Nicholas X. Rizopoulos, then the Institute’s executive director, not only conceived of the conference but worked tirelessly to secure the necessary funding both for the conference itself and subsequently for the publication of these essays. The editors are also indebted to him for his invaluable editorial advice and his unflagging interest in this project.
The conference in Copenhagen was funded in part by grants from the Smith Richardson Foundation and the Lynde and Harry Bradley Founda­tion, and by generous contributions from John D. Soutter and Daniel Yergin. Lars Baerentzen contributed enormously to the success of the conference, handling the arrangements in Copenhagen with efficiency and good cheer. Finally, the publication of this volume was made possible by an additional grant from the Lynde and Harry Bradley Foundation and by a second contribution from Daniel Yergin. The editors speak for all the conference participants and writers represented in this volume when they express their heartfelt thanks to those whose contributions made this project possible.