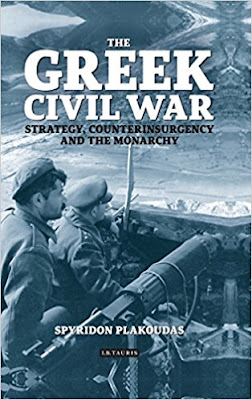 The Greek Civil War (1946-1949) was one of the few instances in the post-World War II era of a clear-cut and permanent victory by right-wing government forces over an insurgent communist movement. Spyridon Plakoudas here explores the factors which ultimately caused the downfall of the communist insurgency in Greece which had, at some points, seemed undefeatable. He questions whether the guerrilla movement fell victim to the feud between Stalin and Tito or whether the significant British and, above all, American aid in fact rescued the Greek monarchist regime from collapse. Plakoudas explores the strategies adopted by government forces in order to counter the communist insurgency, how external and internal actors influenced these policies and when, how and why these policies achieved success. Featuring previously unseen sources and documents, this book reveals the strategy and tactics of the monarchist regime.
===
βλ. περισσότερα academia-Dr_Plakoudas και amazon