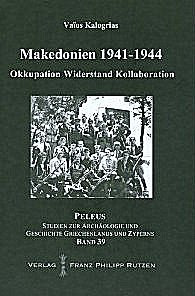 A presentation of German, Italian, and Bulgarian occupation of the northern Greek province of Macedonia from 1941-1944, which to this day presents a desideratum of historical German research. This subject has seen rather marginal attention when looking at Greek history as a whole. The policies of the three occupying powers and the resulting impact on a political, social, and ethical level, the formation of a fragmented opposition movement, and details of the relentless civil war are largely unknown. It is also largely unknown that during, but also right after the end of the conflict, the territorial destiny of this region and its inhabitants was uncertain. Kalogrias' book provides an important contribution to the exploration of the very complicated developments in Macedonian. German text.