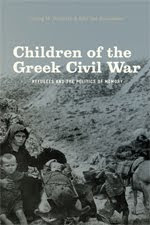 At the height of the Greek Civil War in 1948, thirty-eight thousand children were evacuated from their homes in the mountains of northern Greece. The Greek Communist Party relocated half of them to orphanages in Eastern Europe, while their adversaries in the national government placed the rest in children’s homes elsewhere in Greece. A point of contention during the Cold War, this controversial episode continues to fuel tensions between Greeks and Macedonians and within Greek society itself. Loring M. Danforth and Riki Van Boeschoten present here for the first time a comprehensive study of the two evacuation programs and the lives of the children they forever transformed.
Marshalling archival records, oral histories, and ethnographic fieldwork, the authors analyze the evacuation process, the political conflict surrounding it, the children’s upbringing, and their fates as adults cut off from their parents and their homeland. They also give voice to seven refugee children who poignantly recount their childhood experiences and heroic efforts to construct new lives in diaspora communities throughout the world. A much-needed corrective to previous historical accounts, Children of the Greek Civil War is also a searching examination of the enduring effects of displacement on the lives of refugee children.
“This remarkable study breaks new ground in several areas: in its methodology, its style, and its topic. Historically and ethnographically, the book tells a duplex tale: by two authors, writing about two opposed camps, and exploring the vicissitudes of two states and two ethnicities. Balanced to an impressive degree, Children of the Greek Civil War succeeds magnificently in showing the parallels between the experiences of the two sides in a way that is moving as well as analytically compelling. Yet the greatest strength of the book, aside from the seamless writing and its emotional impact, lies in the theorization of the children’s agency in organizing their present lives and understanding their past.”
—Michael Herzfeld, Harvard University
“Successfully combing archival research with extensive ethnographic fieldwork, Children of the Greek Civil War is a work of first-rate scholarship, grounded in original research and sophisticated theoretical analysis, that is often gripping as it ranges from historical prose to deeply moving personal vignettes. Given the contentiousness of the book’s subject—an understudied but highly significant episode—it is as courageous as it is informed. The time seems ripe for beginning the process of reconciliation, and Danforth and Van Boeschoten’s work will help us move down that difficult road.”
—Maria Todorova, University of Illinois at Urbana-Champaign